The first thing that typically goes through one’s mind when presented with a problem is the problem itself.  We ruminate upon it, emotionally fixated on the fact that a difficulty has presented itself.  In that instant we become paralyzed and trapped in the moment, thinking how difficult or terrible the problem might be.  We vocalize about it, telling our spouse or our co-workers about the problem.  We worry about it, caught up in a melodrama that perhaps we have created all on our own, and allow the problem to continue to exist and perhaps worsen the longer we fixate upon it.

You see, when we are presented with a challenge or a problem, we should recognize the problem, and then we should quickly move on towards looking for a solution.  In order to do this we have to ask this one question – “How, do I solve this problem?”  By asking “how”, we no longer fixate on the problem. 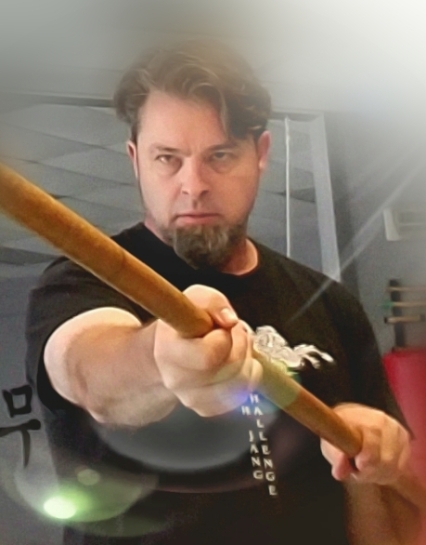 In martial arts, the example would be of a student who cannot do a jumping, spinning crescent kick.  They try to do it, but they are stuck trying to figure out the mechanics, and the problem grows in their mind because they cannot focus on the correct movements.  Instead they focus on just not being able to do it.  They allow the problem to create an emotional barrier that impedes finding a solution.  This leads to frustration, and if they do not learn “how” to do the kick correctly, this problem grows over time leading to greater frustration in other areas.  In this case, when the student says they can’t do it, they should instead be stating they do not know “how” to do it.  Then from there they should be asking themselves “how” do they learn “how” to do it.

This also comes up in daily life outside martial arts.  In the business world, for example, sometimes upper management devises a new policy requiring higher production or higher sales quotas.  The higher production or quotas are so high that mid and lower level management and all the other employees look at the issue as something existing in the realm of impossibility.  They throw their hands up, emotionally, and say this can’t be done.  But if they take their emotional focus off the problem and put their logical focus on the solution, they can quickly ask the question how is the new, higher production or sales quota achievable?  This leads to thought-evoking steps and brainstorming, followed by the next question in the solution process:  What, specifically, needs to be done to reach the solution to this problem?  What steps can be specifically taken?

So don’t get stuck in the emotional trap that a problem creates.  Instead, look to the logical solution by asking one question:  How?

AUTHOR’S BIOGRAPHY Robert lives deep in the heart of Texas where he teaches martial arts and writes in his spare time. He is a former military paramedic, former criminal investigator, and former private detective. He has had various poems and short stories previously published in small press literary magazines, but most notably in Marion Zimmer Bradley’s Fantasy Magazine, and most recently with Anotherealm.com. He is also self-published on Amazon.com and Smashwords.com, in both fiction and non-fiction categories. Robert is the author of “One Second Before Awakening”, his first fiction novel, and also the very successful “The Business End of Process Service”. His forthcoming non-fiction book is “The Art of Motivation”, motivation from a martial arts perspective. Website: http://www.roberthillauthor.net Twitter: robhillauthor Facebook: Facebook profile LinkedIn: http://www.linkedin.com/pub/robert-hill/56/a6a/22b/ Blog: http://thevirtualunknown.blogspot.com View all posts by roberthillauthor

This is a text widget, which allows you to add text or HTML to your sidebar. You can use them to display text, links, images, HTML, or a combination of these. Edit them in the Widget section of the Customizer.

This is a text widget, which allows you to add text or HTML to your sidebar. You can use them to display text, links, images, HTML, or a combination of these. Edit them in the Widget section of the Customizer.